With the advance forecast showing heavy rain for the Scottish Highlands I packed all the wet weather gear I could and prepared for what I thought could be a tough weekend trackside at Fort William. As British Downhill Rounds go this is always the toughest, the track is just legendary and has been long considered one of the toughest on the World Cup Circuit. The drive up is epic both in terms of the time spent in the car and the scenery for the last 3hrs of the journey and pressure on me as a coach as the athlete despite your best efforts flicks up a notch as it’s a long way to go not to come home with a result.

So with all that to consider over the 12hrs it takes to get to Fort William it was a good job I was travelling up with Blockhead Team Rider Josh Lowe and Ghost Factory Team Rider Harry Molloy. I’ve been lucky enough to work with Josh for the past 4 seasons and I worked with Harry for a number of years too so I know the guys well and the hours flew past on the long journey north. 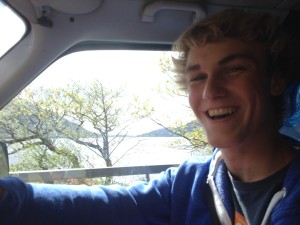 My main focus over a race weekend is the Blockhead Downhill Team and in Fort William I was looking after Josh (Lowe) and Fergus (Ryan). Fergus is in his first year on the team and with our first skills coaching session behind us I was looking forward to working him with trackside. After waiting for the rain to stop Josh, Harry and I took a trip to the top of the mountain to check out what was install. We’d all been and raced at the Nevis Range a lot over the years and although we knew the track well it was interesting to see the changes in line that a hard winter of weather and training opened up. From carry more speed in terns to some interesting tape options it was going to be more than straight forward to get the most from the track. 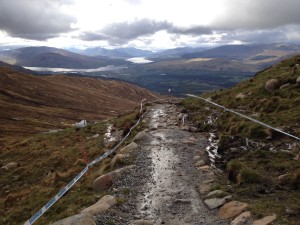 It’s easy to break the Fort William Track down into sectors with the top being made up of the fast open and tight corners and the board walk, then it’s into some big hits in the rocks, before another fast open section takes you down onto the slab. From there it’s full speed ahead to the dear gate and then flat out to the first small section of woods. The starter if you like for the main wood section that had everyone scratching their heads when it came to line choice. In all my years of racing and trail building I’d never seen a section evolve like this one did it was incredible to watch the riders come in on their previous line only to find it had been eroded and gone. This was where the true genius in the riders shone through for sure. Whilst this section wasn’t going to win you the race you could certainly loose it here.

Back up to warp speed for the Silverline Tools hip jump and then down into the woods for the Hazzard Booter complete with evil case marks! The more woods before being fired out into the motor way section. With a super fast run into the first hip it’s then full gas to the finish with the table tops and step downs tempting those that can into throwing in some style as they fly down to the finish line. 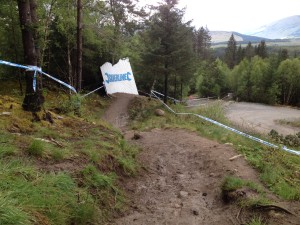 Anyone of the sectors would make a great track on it’s own putting them all together is the art and with 8 of the Cairns top 10 on track there were plenty of speed merchants on hand to show everyone how it should be done.

The rain overnight was biblical and I awoke early in the hope that for once it had rained so much it had run out of the wet stuff. I crazy thought I know but as we headed down to the venue the sun started to break through the clouds and the rain stopped. I had everything crossed that we were going to be in for a dry days practice.

Saturday practice is where I’m busiest checking out the various line options and making sure the riders I work with are on their optimum line. It’s great to have some of the fastest riders on track to compare and contrast and learn from. Full focus as you don’t want to miss anything that could give you an edge. Utilising the system to analyse everything from bike set up to body position there’s a lot to monitor and the I-pad and Coaches Eye gets a good work out when it comes to analysing the essentials of a good run. 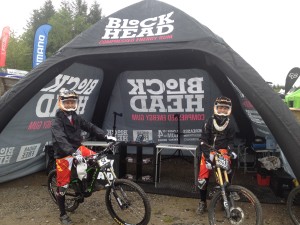 From the guys first run thought to getting back to the pits I spent 6hrs hills side. Analysing each of the sectors and watching rider after rider. As they say time flies when your having fun but I must remember to pack some lunch as it’s hungry work! Then it’s time to feed that all back to the riders, giving them the essentials that I’ve picked up track side before they head up for another run to make sure they’ve maximised the opportunities to squeeze all the time they can from this monster of a track.

More overnight rain meant that we awoke to clouds clinging to the sides of the mountain. Again the forecast wasn’t good but ever the optimist I hoped that again it had run out of rain overnight and that the weather for finals day would stay fine as it had for practice.

It’s an early start on race day with final practice runs to ensure that the overnight debrief and line tweaks are dialled in and everyone’s up to speed. I headed up to the woods section which was changing rapidly to gather some intel on lines and the guys put in their final practice runs to ensure they were up to speed. The woods were still proving their worth as a pivotal point on the track with some of the big names getting into all sorts of trouble on lines that had literally vanished between runs.

With the racing starting it was time to ensure that Josh and Ferg were ready for their seeding run and get into the pits to ensure the other riders that I work with where ready to go too. Youth rider Thomas Davies (Crank Cycles) was up first and put down a solid run to slot into second place. Al Warrell (Team Aston Hill) was next in Junior’s. Al made a big mistake up top as the heavens opened and the heavy rain reduced the grip levels to near zero so he lost a ton of time on his way down meaning that he would be first off in the finals and I had some work to do. In the seniors Fergus put together a solid run but was unhappy seeding just outside the top 10 in 11th. Confident that he had a couple of sections where he could pick up the time he needed to crack the top 10.

Darren Evans (Team Aston Hill) put in a storming run to take 3rd in the Experts closely followed by Nick Geoghegan (Rockstar Energy Team) in 6th. In the Elites Harry set the pace with Josh coming home in a solid 36th place and Jack Geoghegan (Saracen Development Team) coming home with a flat leaving it all to do in the final.

Delays between the seeding and finals gave me plenty of time to get the set up on Josh’s bike dialled and it back to showroom finish with Ducksmart and BGi Cleaner (worth at least a couple of seconds on his run). With the racing on Thomas came home in a 9th place cracking the top 10 for the first time and putting in a solid performance throughout the weekend. I made sure Al got his head together for his final run putting in a stormer that saw him keeping the hot seat warm until the top 10 came down eventually finishing in a respectable 9th place. 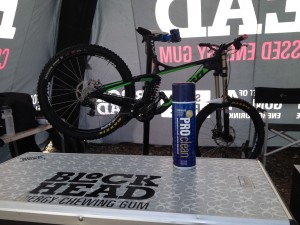 In seniors Fergus punctured high above the deer gate and rolled down to finish the course in 38th place. Chris Cockrill put together one of the best national runs so far to take 12th. Into the Expert Men and Darren had his eye on the top step. He wasn’t far off with just 3seconds between him and the winner. Nick laid all of his Fort William demon’s to rest with a great ride into 6th palace just a second off the podium.

In the Elites whilst all eyes where on the battle for the podium I was focussed on ensuring that Jack, Josh and Harry could put together their best runs of the weekend. 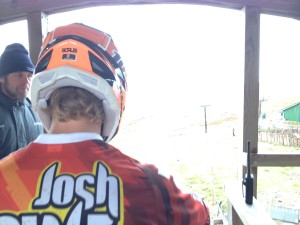 Jack was one of the first Elites on course after his puncture and that saw him keep the hot seat warm for a while. He was eventually push down into 29th place a very respectable finish against a field of this caliber.

With confusion over start times I sent Josh off to keep warm thinking we had three minutes to go rather than 3 riders. It was all a bit of a panic to get him to the gate on time and as he sprinted out of the start he slipped both pedals. Riding the stem to the first corner I’m sure it wasn’t just my life flashing before my eyes. As his feet found the pedals and he took a second to compose himself and then gassed on into the top section. I had a feeling that what might have seemed like a nightmare start might have been just what Josh needed and it was! He flew down the course 6 seconds quicker than in seeding and finished in 35th place which in a field of this calibre is a result!

Harry was the last down and he lost a second on seeding but he’d done enough to secure 23rd again a fantastic result considering the calibre of the field and the perfect rehearsal for the World Cup here at the start of June.

So all in all it was a great weekend of racing. Lot’s learned and plenty to take away to work on back at home in preparation for the next few weeks of racing. For Josh, Harry and Fergus it’s the IXS Cup in Marribor this weekend and then back to the next BDS in Ae Forest.

Hopefully Josh will make the GB Team for the next two World Cups (selection announced this week) and we’ll be back up to Fort William to support him on track at the start of June. Till then I’m off to analyse the results and plenty of video. These marginal gains don’t find themselves!

If you’d like to take your skills to the next level Ian works with riders of all ages and abilities from complete beginners to World Cup racers. For more information click over to the courses page on www.firecrestmtb.com