Firecrest MTB Team returned for the 2017 race season with a slightly different ethos. Looking to support two Senior Category riders and to focus on the development of these riders to illustrate how the Firecrest MTB Skills Training can enable athletes to achieve their goals, by setting some lofty but achievable targets and then working with and coaching the Team Riders to achieve them.

With Firecrest MTB already training a number of Elite Riders across the Mountain Bike disciplines the opportunity to support Racers in the Senior Category (19.29yrs) presented us with a great showcase to underline what’s possible with the right programme of skills training, fitness training and Team support in place.

The Firecrest MTB Team Riders for 2017 were Chris Cockrill and Pete Robinson. Two seasoned Senior racers. Both working full time jobs with the challenge of fitting training and racing around their busy day jobs whilst chasing the dream and racing downhill at the weekends.

Setting sensible targets is essential for a racers motivation, so the riders targets were set at a top 10 or podium at the BDS, top 5 at the Pearce Races, podium finishes at regional and local races. 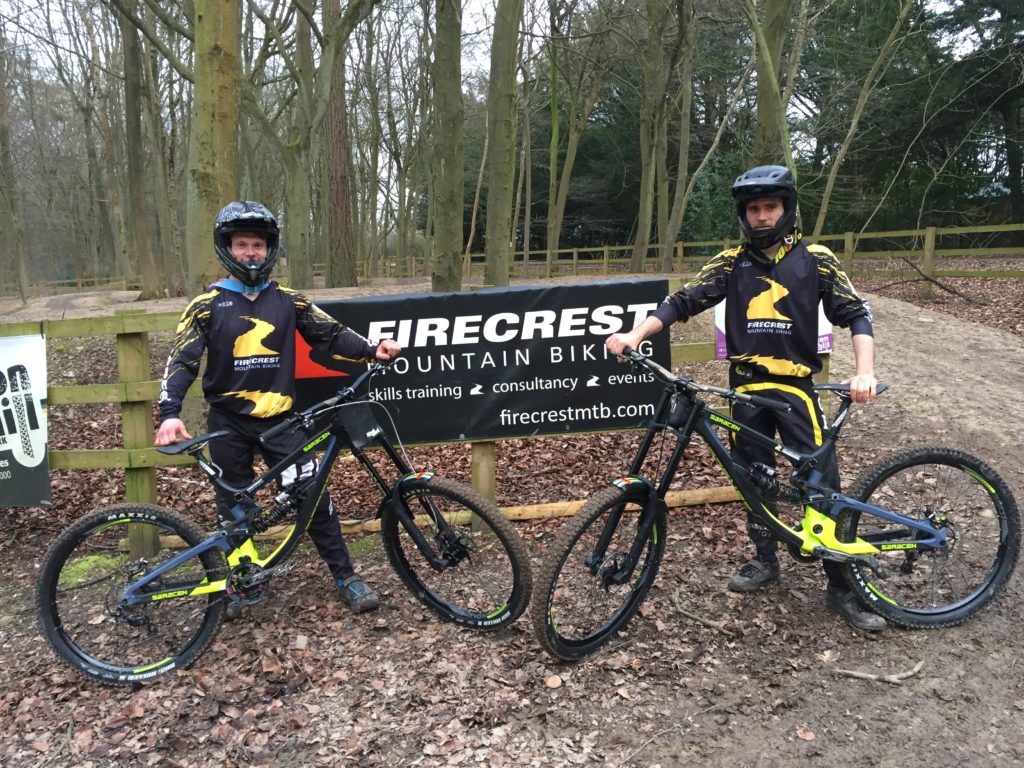 The Firecrest MTB Team has some great sponsors and partners for 2017. Saracen Myst Downhill Bikes were the race bikes of choice, with Mudhugger providing custom front mudguards, and Bell Helmets providing head protection.

The riders have access to Firecrest MTB’s Skills and Fitness Training working with Ian Warby to hone their skills. With MTB Skills Training sessions on Aston Hill throughout the year and the option to fine tune their fitness training through the Training Peaks online Training Platform.

The 2017 Race Season got off to a perfect start on our home tracks on Aston Hill when Chris won and Pete came second at the Ricochet DH Race. What a result and a great way to get the 2017 season started. Whilst it’s great to hit performance targets so early in the season it’s also hard as it can put pressure on racers to continue to meet or exceed their targets. However, it’s a great boost to a racers confidence going into the season proper as they know the hard work in the off season is paying off. 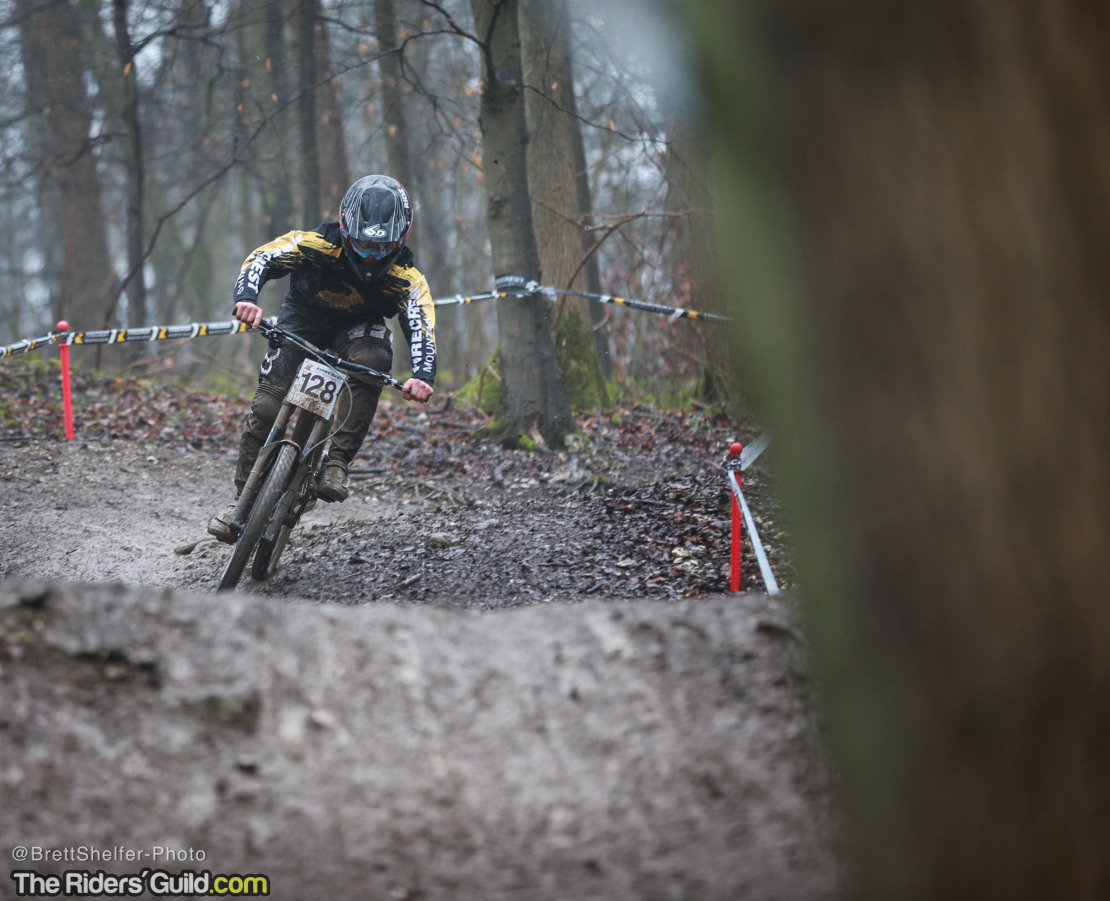 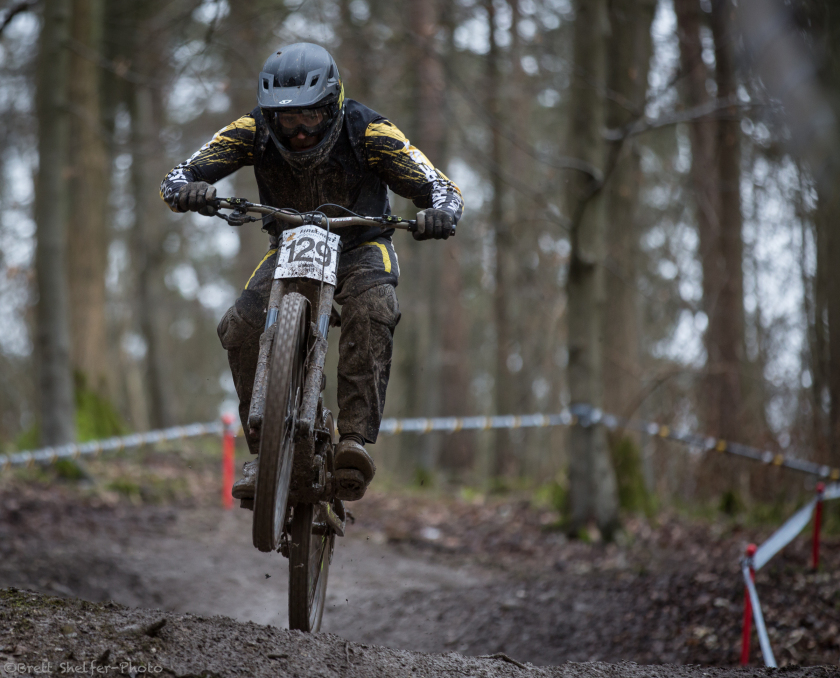 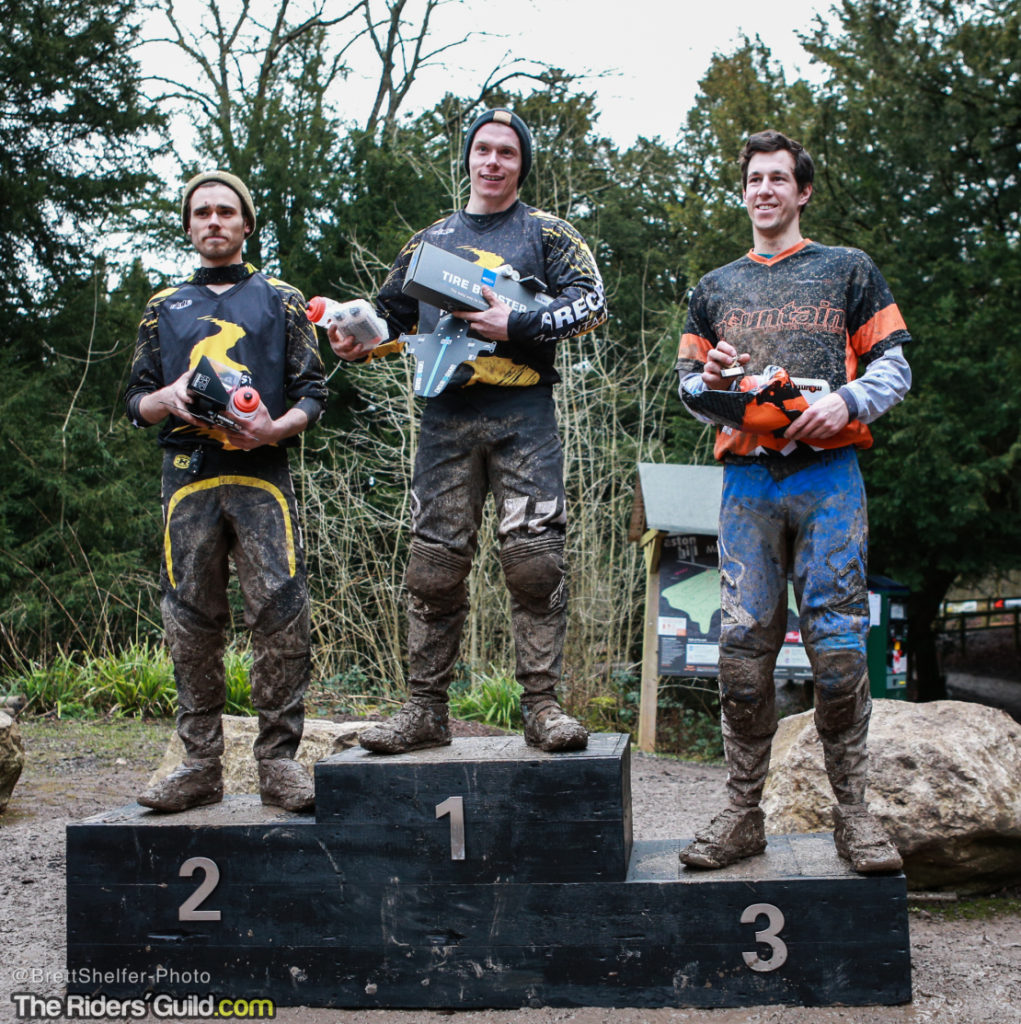 The first round of the BDS set precedence in terms of the weather at Race weekends for the majority of the races in 2017. Wet and windy conditions turning getting a result into more of a lottery. The guys decided to skip racing in North Wales at Round 1 of the BDS and kicked of their Pearce campaign with Round 1 at Kinsham. A track familiar to both Pete and Chris but one that takes a certain rhythm on track to score a good result. Chris came home in 14th and Pete struggled coming home in 27th.

The Highs and the Lows of Racing

Racing as an amateur can be tough. Working hard and training hard takes its toll on the racers minds and bodies. Recovery is key to a riders development and it’s all to easy to miss the signs when some rest and recovery is needed. Chris was about to find out just how tough it can be. Illness hit him hard and for a while it looked like it might be time to hang up his full face.

Specialist help and a diagnosis of a treatable stomach condition meant that he could get back on the bike and get his 2017 race campaign back on track. Meanwhile Pete had been suffering with a problem with his wrist for quite a while seeking specialist help didn’t really explain the issue or offer a cure so further tests would hopefully get to the bottom of what was wrong.

The season however was now in full swing and the Pearce Race Series was flying through the rounds. There were more wet and muddy races to challenge the guys on track and keep the washing powder companies in business at the end of the long muddy weekends. At Round 2 of the Pearce Series in Bringewood Pete came home in 18th and Chris had to skip the race due to his health problems. 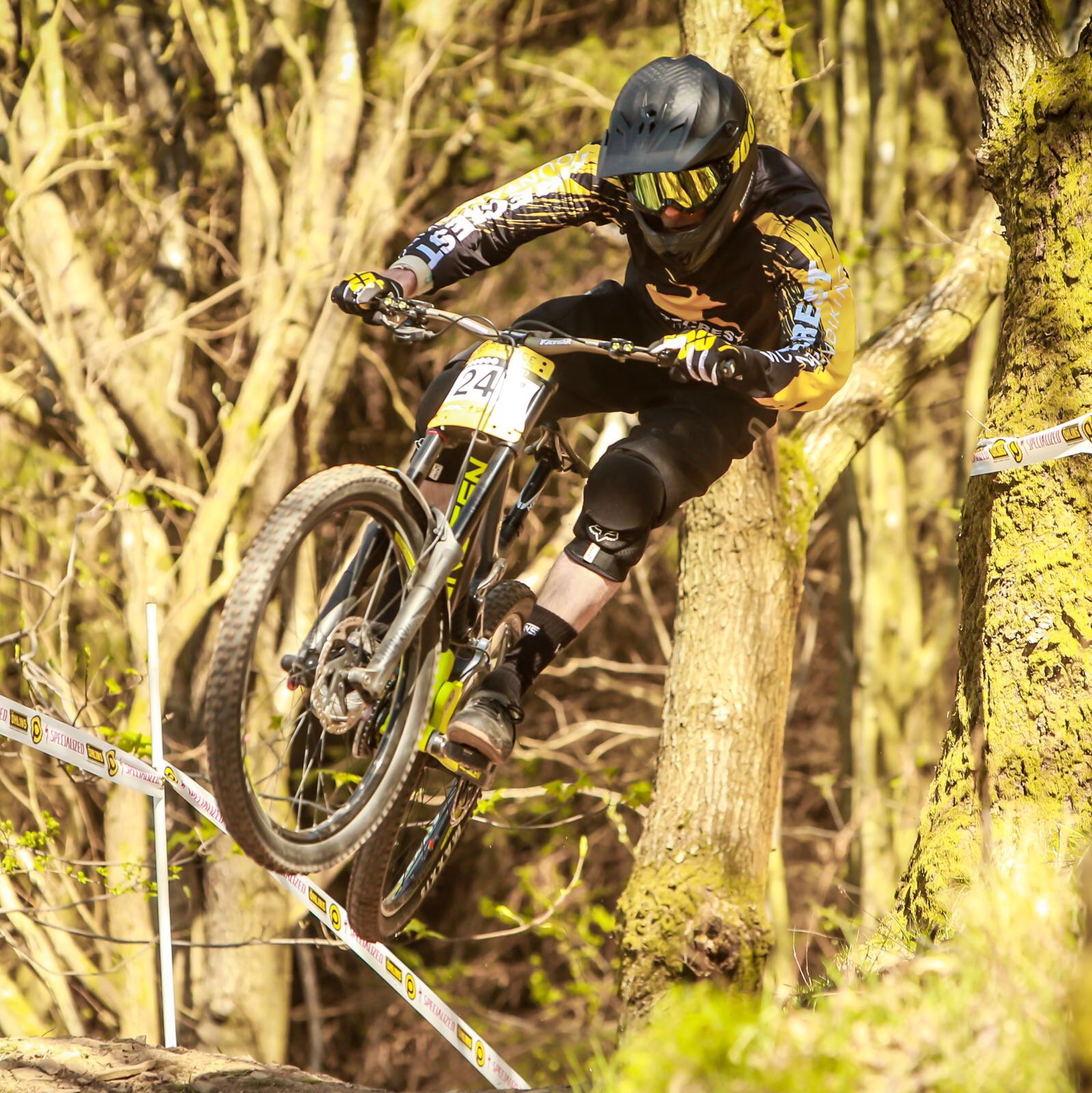 Both Chris and Pete skipped the BDS in Fort William to recover and recoup, focussing on the busy mid season races. Chris was getting back to full fitness with the right medication and Pete was still on the pace despite the loss of strength in one hand due to his wrist (some might argue his front wheel isn’t on the ground long enough for him to notice). Pearce Cycles Round 3 at Rhyd y Felin (Bala) was one of the muddiest and toughest races of the year. The track is unforgiving at the best of times and Pete slide her home in 11th  with Chris in 29th. 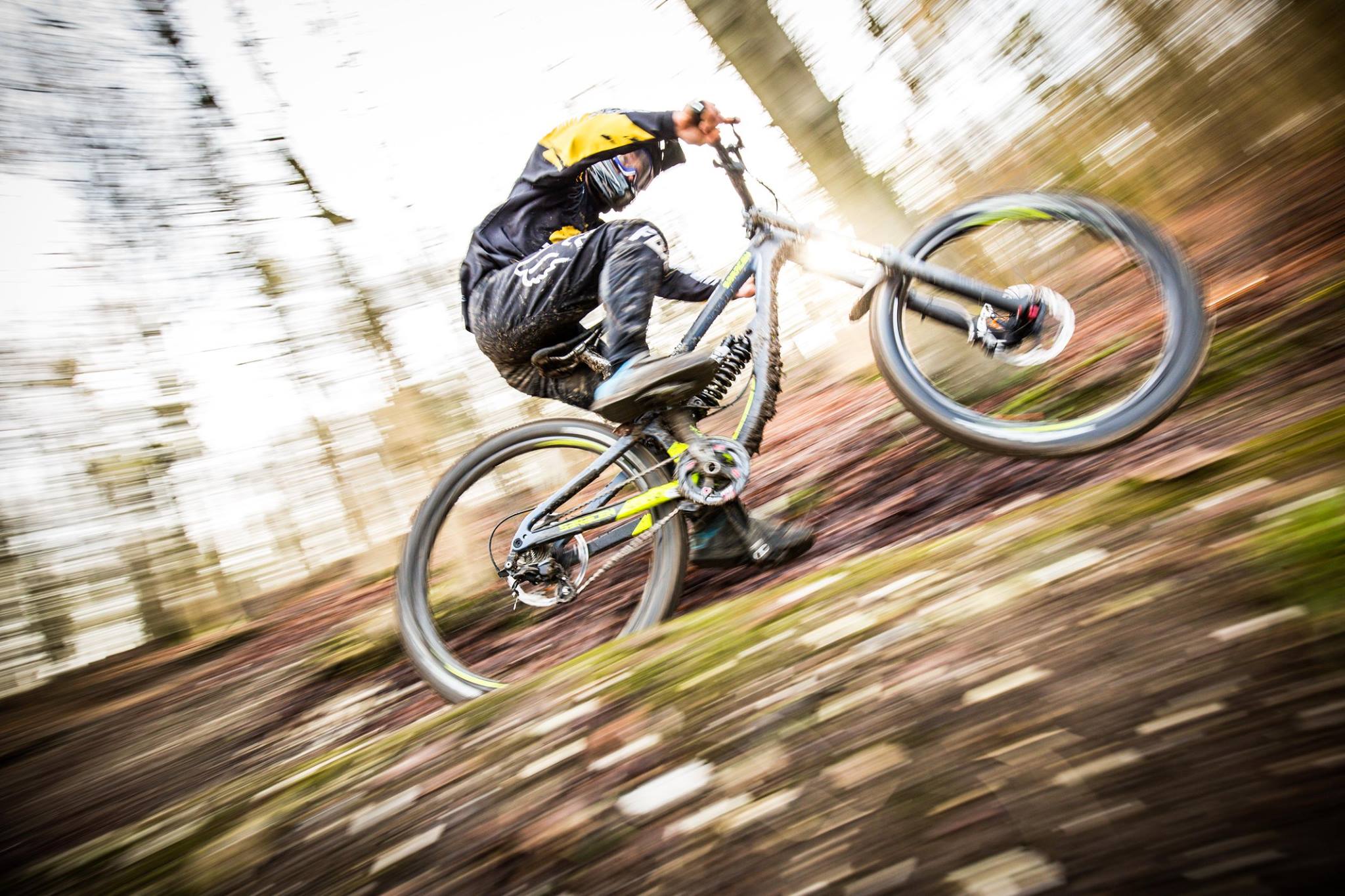 The following weekend the BDS went back to Bala. The track had died out and both Chris and Pete were flying. BDS Round 3 saw Chris hit one of his big season targets with a top three finish in Seniors. An awesome ride against the UK’s best and a podium place at the highest level for his efforts. Pete meanwhile was on the pace when he ran over a Grouse sending it flying into his chest and blowing any chances of him joining Chris on the podium he rolled home to a creditable 14th place finish wondering what could have been. Such a frustrating turn of events as there’s been so little between the guys this season Pete was pretty much nailed on for a podium finish here too! 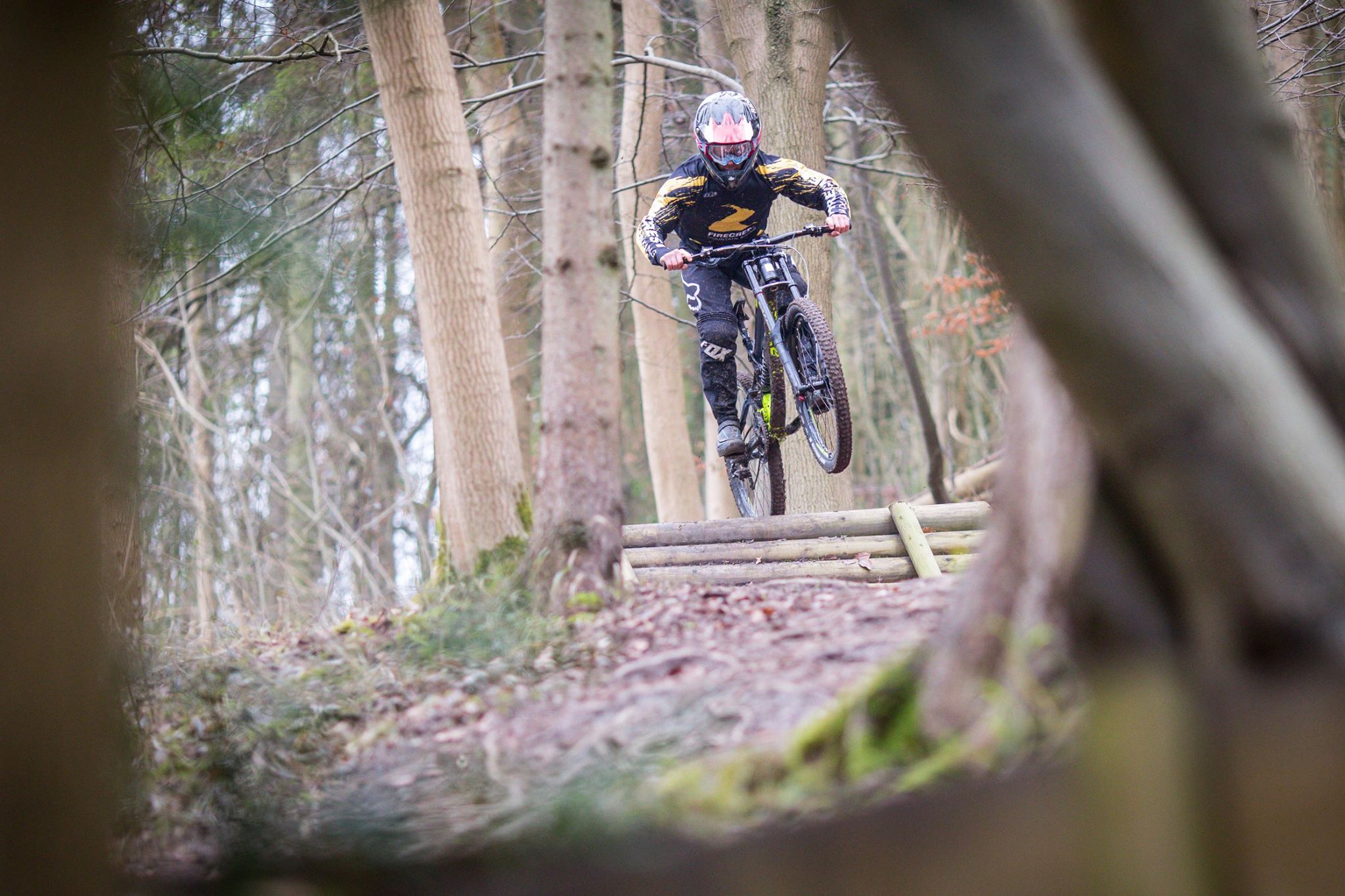 More great results through the busy mid-season, Pearce Round 4 was a mud bath again at Rheola. Pete put in a great ride to come home in 12th and Chris was right on his wheel in 13th with just .013 of a second between them. The last race before the summer break was Pearce Round 5 and the English Champs at Hopton. Pete came home in a very creditable 16th place with Chris making it into the top 20 with 19th. The mid season break gave the guys the chance to head out to France for some serious fun in the mountains. 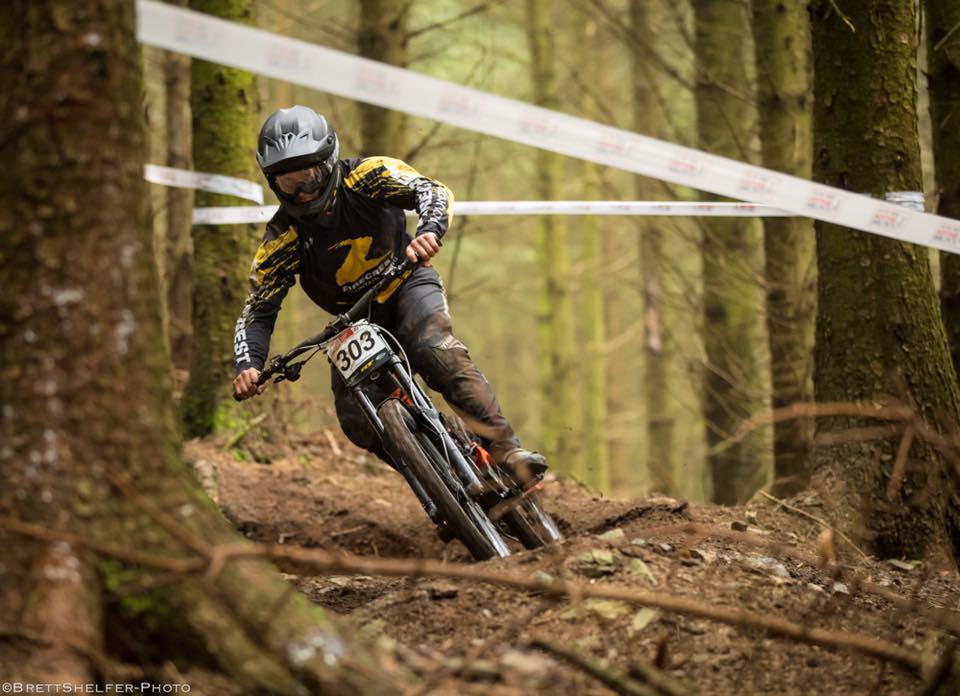 Back on home shores and the last few races of the season. Blackrun 20 was another chance to impress on home trails. Chris was sidelined with illness but Pete put all of his Blackrun demons to bed and scored a solid 3rd place finish and finally making it onto the podium on a trail that’s not been kind to him in terms of results over the years.

That left the final round of the BDS and the last round of the Pearce Downhill Series to round out the series. It was back to Hopton for the final ever BDS as Si Paton hands over the organisation of the event to New organisers in 2018. We’d just like to thank him for all the hard work he’s put in over the last 10 year on the BDS. It’s been great and we’ve been very lucky to have one of the best domestic downhill series in the World here in the UK. 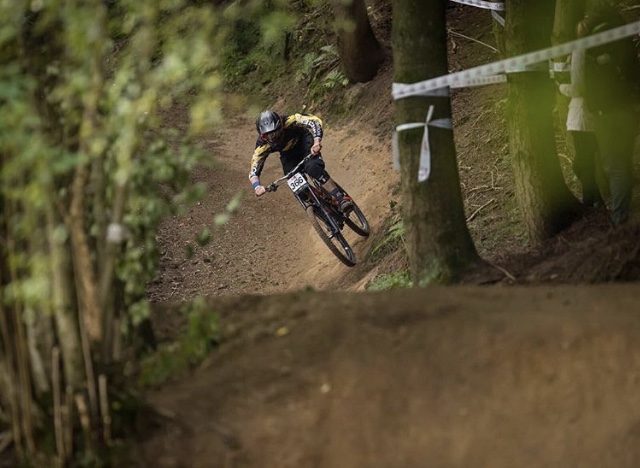 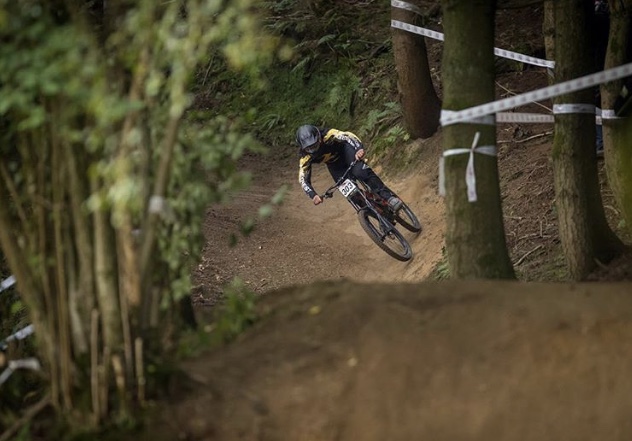 This is Chris… Hard to tell them apart especially when their times are so close!

For the final round the weather followed the seasons trend turning the trail into a wet and wild run from top to bottom. Chris and Pete finished 24th and 10th respectively. Pete hitting his season goal for the BDS at the final round with a great ride. The final round of the Pearce Downhill Series headed to Bucknell the weather once again played a major role in how the weekend panned out with wet and wild conditions on track. Chris clocked a run time of 2:18:082 and Pete clocked a 2:18:084 leaving just .002 of second between them. The closest they’ve been all year with Pete clocking his time on his first run and Chris on his second.

What a season, as always there were highs and low’s, frustrations and challenges but overall the Team has a great season. To make things completly fair in the 8 races that Chris and Pete went head to head they finished the season with 4 races a peice showing just how close the inter-team competition was too. Thanks for a great season!

Time for some hard earned R&R

I’d like to thank Chris and Pete for doing such a great job this season representing Firecrest MTB not only at the races but for the time they give back in supporting the young riders through our Young Rider Development Programme (DeVo) when ever they can.

Thanks also to the Firecrest MTB DH Teams Sponsors and Partners as always without your help we would be able to go racing, 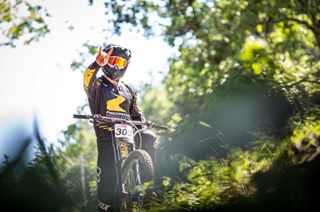 Thanks to all the photographers that contributed to the round up – BigMacPhotography, Brett Tree Shelfer and all the others that captured the Firecrest MTB Team this season.

Look out for more news soon on the 2018 Firecrest MTB Team and our plans for the races next season.

See you on the Trails!