It’s hard to believe that it has been 10 years since I last organised the Downhill Races on Aston Hill, signing off on 10 years of Race Organisation (DH,4X and XC) on Aston Hill back in 2007. The Aston Hill Bike Park Committee have done a fantastic job in running events on Aston Hill over the past few years. However, it’s tough putting together events of the calibre they have been for a group of Volunteers in their spare time so in agreement with the Committee and the Forestry Commission I’m pleased to announce I’m back and I’ll be running Mountain Bike Races on Aston Hill in 2017. 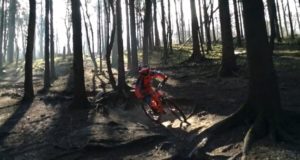 I can’t wait to get started. 2017 is a pretty significant year for Mountain Bike Racing on Aston Hill as it marks the 20th Anniversary of Racing on the Black Run.

With that in mind I’d been speaking to Gary the Chair and the Committee about organising ‘Black Run 20’ for the past couple of years and when the opportunity arose to organise all of the races on Aston Hill in 2017 came up it was too good an offer to turn down.

I have three events planned for 2017 – two Downhill Races and a Pedalhounds Mulit-Stage Enduro Race.

Dates for your diaries: –

Find out more and Enter Here>>>

For those of you that were there at the first Black Run Race you’ll know what a milestone 20 years is. The bikes, the riders, the trails, they’ve all changed and of course the Black Run has got gnarlier as have we all, but it’s essentially the same Race Track that riders took on 20 years ago.

A few ‘tweaks’ will be added, taking you back to the original Black Run and celebrating 20 years of action on Aston Hill’s infamous ‘Black Run’. Catching up with the riders that have tamed the Black Run and a few that didn’t. It’s going to be a real celebration of all things Aston Hill and the Black Run. Don’t miss it!