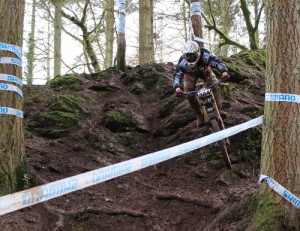 Josh Lowe, riding for the brand new Blockhead Energy Gum DH Team scored his first win at national level, making it a dream debut for his delighted team who are now off to a flying start to their 2013 campaign.

Conditions at the Combe Sydenham course at Exmoor national park were challenging, following heavy rainfall the previous day, but newcomer Josh finished in the fastest time in the Expert Category, taking his place on the podium only four months after graduating from the Junior Category.

The Combe Sydenham course presents the racers with a number of challenges from the tight and twisty wooded sections that punctuate the hillside through to big jumps and high speeds that are a fans favourite through the open middle section of the track.

“I’d felt great coming into the weekend, my training (with Firecrest MTB) over the winter has gone really well and my new Trek bike performed brilliantly in the tough conditions,” said Josh. “With the weather making things so difficult so I am even more thrilled to take the win today.”

For team manager and performance coach Ian Warby, the result was a dream start to the season. “When we sat down and talked about setting the team up at the start of the year this was a dream. For Josh to be on top of the podium is a fantastic result and it’s great to get the season off to such a good start. I can’t thank our sponsors enough for working so hard to get the team here for round one and their support for our 2013 race programme.

Now The Blockhead team are looking forward to more wins as their riders compete at events across the UK and Europe over the summer.

Blockhead Energy Chewing Gum launches in May 1st 2013 – made from a brand new gum technology, Blockhead energy gum delivers an increase in cognitive and physical performance which is digested 5 times quicker than an energy drink. One pack of 10 gums is comparative to 4 energy drinks, so at £1.95 per pack they are great value for money. For more detail see www.block-head.com

Tesa Tape is the number one protective tape in the automotive industry. It’s perfect for protecting bikes too and preserving that show room look for longer.

Firecrest Mountain Biking provides skills and fitness consultancy providing a range of mountain bike skills courses on Aston Hill for riders of all ages and abilities.

To find out more about Blockhead Energy Downhill Team and Firecrest’s range of MTB Skills courses click over to the website www.firecrestmtb.com