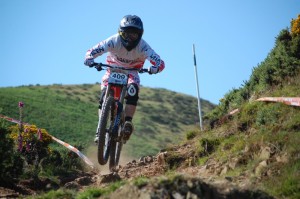 Josh Lowe flat out at the National Downhill Championships 2012

There’s one weekend on the UK’s domestic calendar that for most athletes everything pivots on. It’s the National Championships! It’s the big race of the year and the chance to put your name in the record books and a National Champions Jersey in your wardrobe.

From a skills development perspective the work never stops and although it’s hard to fit in sessions during the busy race season I’m always reviewing the races with riders and looking at new techniques for the riders to try. Mark’s also busy with the Fitness Training side of things, peaking at the right phase in the season is and art and at Firecrest we are fortunate that Mark seems to have the magic formula to ensure that riders are on form come the time of their targeted races.

From a coaches perspective you’re working on making sure that all the work is done and that the athlete is ready coming into the weekend. As Seb Coe used to say “the hay is in the barn” there’s nothing you can do in the week before your race what will be will be. It’s also a challenge to maintain a perspective and focus from an athletes. You can go into the Championship in the form of your life, you’ve worked hard but so has the competition all you can do is the best you can on the day.

Here at Firecrest we are committed to working hard to make sure athletes reach the championship in the best possible condition to the do the best they can do.

Firecrest skills and fitness trained rider Maxine Filby went into the weekend after a strong showing to date. A third place finish at the last round of the National Series and World Cup in Canada and the States under her belt Maxine was in confident mood when I saw her last week for a skills session in the run up to the Champs weekend.

At one of the National XC Series races earlier in the year she’d struggled with her breathing and to her frustration the problem returned on lap one. To Maxine’s credit she doesn’t give up easy and after nearly a lap gasping for breath she found her rhythm and came home in a creditable 8th place. A little frustrated at the time having struggled with her breathing, but that soon passed when I reminded her of her goals at the beginning of the season. Ok she was a couple of places behind the top five placing she was targeting but it was still a great result and it give’s Mark Baines (Firecrest’s fitness expert) and I plenty to work on for the rest of the season and into 2013!

The season continues and Maxine heads out to France for the next round of the World Cup in Val d’Isère France to continue here international campaign.

Firecrest works with a number of downhill riders on the UK and World Cup Downhill scene. From the skills on the bike to the mindset off there’s far more to getting things right on the downhill bike than people first think. Control of your bike and more importantly control of your emotions, particularly the fight, freeze or fight response are key to putting together the perfect run. 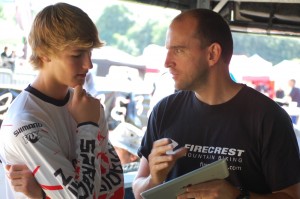 Since the days of Junior Development Firecrest MTB has always worked with up and coming talent in the junior category. This FMTB Skills Trained Athlete’s Josh Lowe (Madison Saracen) and Mike O’Brien (Speedsport) racing have been working with Firecrest.

Unfortunately a combination of a shady transition and gust of wind too Mike over the bars, landing heavily in the 4X jump section of the track ending his day and his chances in practice.

So for Firecrest the focuss switched to Josh, coming in off the back of a strong performance at the last BDS race in Glencoe Josh was ready to give it his all. Seeding in 6th showed he was on the pace and in the finals he shaved 4 seconds off his seeding run to finish seventh on the day.

Phil Atwell (Madison Saracen)  just missed out on adding to his medal collection, second in seeding and fourth in the finals left Phil a little frustrated but as a first year junior he’ll be back for revenge in 2013. Phil got into mountain biking through Firecrest’s Junior Development program back in the day and it’s always good to see him putting in great performances and doing his selection for the 2012 Junior World Championship  Team no harm in the process. 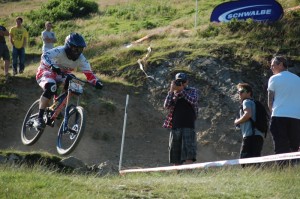 Firecrest have been working with Harry Molloy (Madison Saracen) for the last three seasons. Harry comes to us for skills coaching and to work on his mental preparation. With a big team around him and lot’s of support we provide a little consultancy and insight from time to time. Polishing his skills and tuning up his mindset.

Harry’s had another stellar season both domestically and internationally as the 21 year old builds continues to build his experience and reputation. Fifth in seeding underlined his confidence on this track. Setting off just in front of Steve Peat in the finals Harry came home to take 9th place. Not quite what he wanted coming into the finals and based on his form in seeding but enough to put him inside the top 10 against some of the fastest riders in the World. 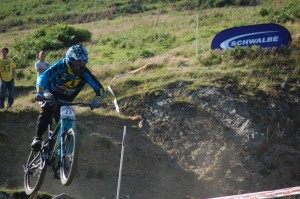 Olie Burton on his way to 14th place on the day.

Olie Burton was on form too, coming home in 14th place to underline his form of late. Olie was another rider targeting a top 10 performance but with times as tight as they were he’s looking forward to the remaining international races and a strong finish to his season.

Dave Kynaston continued his come back after his arm surgery over the winter. As with all recovery’s it’s been a long road. But Dave starting to find the pace of a couple of seasons ago and we are working hard to get him back up to full speed for the remainder of the season and into 2013.

So that’s the 2012 Nationals rapped up for another year:

Here are your Cross-Country Champions:

Here are your Downhill Champions:

Thanks to www.twitter.com/robbiedevery for all the photo from the Sunday.