What a season! Endless highlights, milestones and progression – and yet there is still one FMB World Tour event to go. Red Bull Rampage, the ultimate freeride competition that keeps us sitting on the edge of our couch, is just around the corner. On Sunday October 13th the bravest athletes will ride down their chosen line to once again show the world what big mountain biking is all about. Tune in to Redbull.com/bike  for LIVE action straight from the Utah desert. 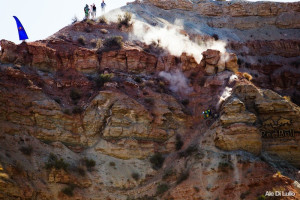 Ask any mountain bike fan about memorable moments in the history of biking and you are guaranteed to hear about some insane line or drop from Red Bull Rampage. Truth be told, Cam Zink pretty much has the greatest trice in the bag with his 360 spin from the Oakley sender back in 2010. However, the list of jaw dropping moments is infinite. The natural terrain available gives riders enough space and possibilities to express their riding in the purest form. Whether it is speed, big drops or step-downs, flow, amplitude or technical skill – the options are everywhere and ready to be shredded.

Although Sam Pilgrim may already have the 2013 FMB World Tour title in the bag, the top 10 overall ranking is still a puzzle of big names, eager to finish with a solid result. For days riders from around the globe will be choosing and shaping the line that fits their riding style best in order to score every last point they can.

Last year’s winner, Kurt Sorge is out due to an injury, leaving 2012 runner up Antoine Bizet with a shot at victory. Antoine has recently shown great skill on his big bike and it is certain he will be gunning for the top spot. Another victory favorite, Darren Berrecloth is sadly also out due to an injury during this week’s practice. Many fans were looking forward to seeing him compete – we wish Darren a speedy recovery. The list of names with a chance of taking the win goes on and on. You can find the full athlete list on the FMB World Tour website, just click here.

In addition to the action  – make sure you tune in to watch Sam Pilgrim officially enter the history books as the first European to win the FMB World Tour, when he raises the golden CamelBak Eddy bottle trophy after the Red Bull Rampage celebrations.  Tune in live via Redbull.com/bike  on October 13th.

So, clear your calendar – stock up on beverages and snacks then sit back and enjoy the last FMB World Tour event of the season. Follow online for updates and news on www.facebook.com/fmbworldtour & www.twitter.com/fmbworldtour