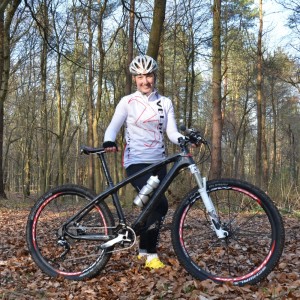 As a potentially historic season in the history of British mountain biking gets underway this weekend with the National Series opener at Sherwood Pines, one company will be making its very own small piece of history in Nottingham.

Velocite UK will take to the start line with Elite rider Maxine Filby at the helm of her Velocite Flux for what will be its very first race in Britain’s premier MTB race series.

Whilst the bike has been used very successfully by privateer racers in the series and in World Cups before, this weekend will mark the first time that the factory has actively supported a rider and will be present at the races.

Maxine’s racing Flux is based on the standard Velocite Flux 1.0 that the company offers as a build package through its website www.velocite-bikes.co.uk and via a steadily growing network of retailers. However, Velocite also offers custom build packages and Maxine’s bike was put together to meet her exact requirements for the perfect race bike. 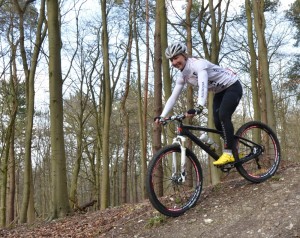 Fitted with a Rockshox SID XX fork and full Shimano XTR group as standard, Maxine has chosen to run her Flux 1.0 with a single chain ring with chain device as well as upgrading the wheels through Velocite’s options list to include Fulcrum Zero wheels and tyres added from her tyre sponsor, Schwalbe UK.

The resulting bike is a sub 20lb pure racing machine that, despite its intended use, is also a very capable and fun trail bike as Maxine explains:

“Since getting the bike I’ve been testing it out on trails around the country, most recently in North Wales”

“It is without doubt the fastest bike I’ve ever ridden and yet it feels so stable, stiff and planted in really rough terrain. I am really over the moon with how it rides”

2012 will see Maxine racing the Velocite in selected World Cups as well as National and regional races and she has already started strongly. A win in her very first regional race was followed by a hugely creditable and impressive 12th in a race in Spain where she faced off against some of the top female Elite riders in Europe.

“I’m lucky to have some really great sponsors from Velocite to my local bike shop, Baines Racing and Schwalbe UK amongst others and I’m confident we can put a good season together. I’m really excited and can’t wait to get started now”.

The National Series starts this weekend at Sherwood Pines near Nottingham and will feature a packed weekend of riding and activities for all the family – mountain bikers or not – with the main races taking place on Sunday.

The Velocite Flux is available in a selection of SRAM and Shimano builds or as frameset only via http://www.velocite-bikes.co.uk and selected retailers. You can also follow Velocite for regular updates and race reports as they happen on Twitter @Velocite_BIkes

More information on Maxine can be found at www.maxinefilby.com or through her Twitter feed @maxinefilby