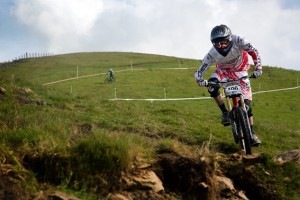 Phil at full speed at the National Downhill Championship

Back in the year 2000 I started out on a mission to encourage more youngsters into mountain biking and set up a program know as Aston Hill Junior Development.  The program one of the first in the UK had a simple aim; Introducing young people to the sport of mountain biking in a fun and challenging environment.

Developed initially as a school holiday activity program DeVo as it became know for short gave hundreds of youngsters the chance to try mountain biking and introduced them to the trails on Aston Hill.

Over the years the program has produced some of the UK’s fastest riders and a number of National winners and National Champions but to date they have come close but none have represented the UK at the annual mountain bike World Championships.

That was until this year!  Back in 2005 Phil came along on one of the DeVo sessions and as with all champions was an immediate stand out as having the speed and skills essential to excel at downhill mountain biking. With a few of the DeVo sessions under his belt Phil was getting quicker and quicker and the lure of the race track saw him enter his first race. .

Phil has ridden for the Milton Keynes based Madison Saracen Downhill Race Team for the past two seasons and has added the Youth National Championship and a number of British Downhill Series wins to his CV to date.

This year he’s completed the full World Cup Series qualifying in Fort William, UK, Windham, USA, and at last weekends penultimate round in Val d’Isère, France Phil came home in a career best 34th place overall and second junior! A result that underlines his potential in the build up to the World Championships in Leogang Austria.

I’m immensely proud of Phil and it’s great to see that all the hard work and effort that he’s put into his career to date is paying off. I can’t wait to see how he goes at the World Championships and I’ll be following the championships closely. Look out for news on our Facebook page and up to the minute updates via our Twitter feed!